The quality level of your indoor air is of the utmost importance as it relates to you and your family’s health. In fact, it is a critical factor in the process. Did you know that outdoor air is less polluted than indoor air? In fact, indoor air is often five times more polluted according to the EPA. Our Ameritech Platinum IAQ products are effective for both residential and commercial spaces. By keeping your system clean and free of mold, AmeriTech’s Platinum IAQ products improve air quality as it circulates through your HVAC system increasing efficiency and system life.  Contact us today! 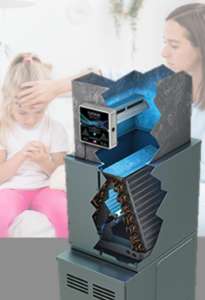 Platinum Carbon Improves indoor air quality by reducing airborne biological and odor-causing (and potentially toxic) VOC contaminants. Platinum Carbon technology is the culmination of decades of research culminating in scientific advances including germicidal ultraviolet light, photocatalytic oxidation and antimicrobial nanotechnology. Nearly all odors are caused by volatile organic compounds or VOCs. Many VOCs , such as formaldehyde and toluene are also toxic. Platinum Carbon neutralizes VOCs in a process similar to the way the catalytic converter in your car works. When VOCs are neutralized the odors are destroyed and the hydrocarbon molecules that cause them are reduced to harmless water vapor and carbon dioxide. Because the UV-C light in Platinum Carbon is positioned where it is, it can also disinfect the coils, air system interior, and air stream the same way Platinum UV does.

Platinum UV keeps your AC coils free of mold and improves indoor air quality throughout the home. Mold on cooling coils robs the air system of efficiency by clogging up the hundreds of fine metal plates that make up the coils. Platinum UV uses germicidal UV-C light to sterilize mold and other microbes. The result is a significantly improved air system efficiency and longevity. Platinum UV also kills germs, bacteria, viruses, and allergens in the air as it passes through the air system resulting in healthier indoor air for your family. There are several models to choose from, your HVAC contractor will help you select the right one. 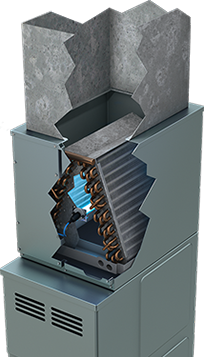 Platinum Dual combines the odor and VOC neutralizing capabilities of Platinum Carbon with a second Platinum UV light (usually mounted at the coil) for comprehensive indoor air quality enhancement. Since both units are powered by the same advanced electronic power supply the Platinum Dual system is more cost-effective than purchasing the two systems separately. 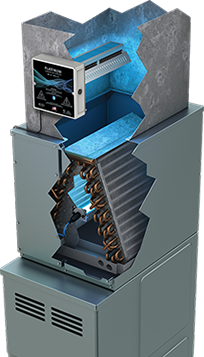